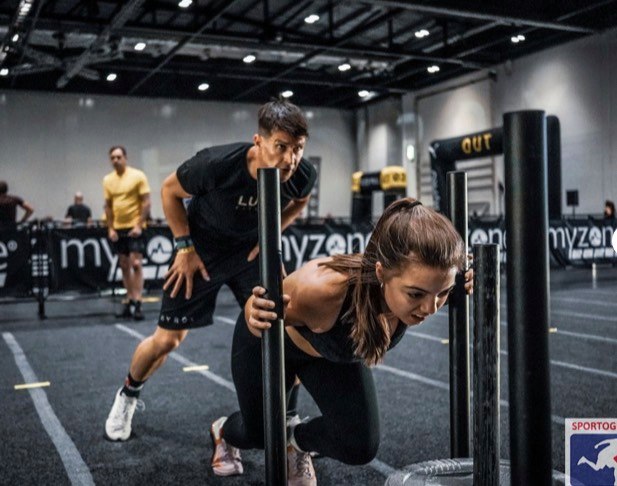 It’s been a tough year for local obstacle course racing (OCR) champion Evie Waring. Her family had to contend with Covid. Due to the pandemic, competitions were cancelled. However, we’re delighted to learn that things are picking up. Evie is back in OCR action. She’s targeting the 2021 Spartan World Championships.

Recently, 16-year-old Evie helped launch the Spartan x Myzone partnership. Its aim is to reward effort, not just ability. She spent a day in London filming the launch video.

Also, Evie trained at the WIT gym in the heart of London’s St. Pauls district. Here, she joined some of the top UK elite functional fitness athletes. Once again, Evie took a starring role in a new video.

Next, on September 25, Evie competes in HYROX London. Then, she’ll be heading to HYROX Birmingham on October 30. HYROX looks set to be an exciting innovation. It’s billed as the World’s Biggest Indoor Fitness Competition. Basically, the format is a 1km run, followed by a functional workout. Repeated eight times! This autumn’s London event is the first in the UK. Evie is excited to be in the doubles competition. Understandably so, as she’s teaming up with Gordon Fearn, winner of ten World and European Tai Kwon Do titles!

Certainly, Evie’s calendar is filling up! She will attend another key event at WIT, London. It’s a big deal. Firstly, it’s invitation only. More importantly, Evie gets to train with men’s HYROX World Champion Hunter McIntyre! Of course, this kind of experience is invaluable. It will definitely help her preparations for the 2021 Spartan World Championships.

Unfortunately, the pandemic has had a significant impact. Family members were ill with coronavirus. Happily, Evie didn’t get it. Due to travel restrictions, she can’t compete in the OCR World Championships in the USA. It’s also disappointing that several popular events, like Spartan Twickenham, were called off.

So, here’s hoping Evie stays healthy. And that she makes it to the Spartan World Championships. Postponed from 2020, the competition takes place in Abu Dhabi from December 3-4. Right now, Evie is focussing on her training. She’s putting in the hours. So, she’s ready to take on the world.

Howards is proud to sponsor Evie Waring. We wish her all the best for her forthcoming competitions!