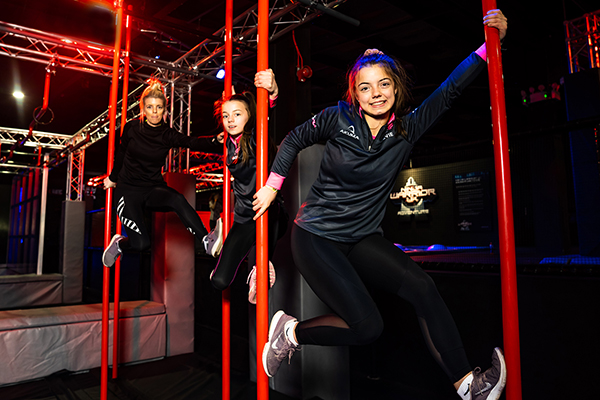 Evie (right) is pictured with her sister Maddie (centre) and mum Emma (left) during a recent training session at the Ninja Warrior UK Adventure Park in Stoke-on-Trent.

Howards has just renewed its sponsorship of UK OCR champion Evie Waring for another year.

The four-figure deal means we retain our title sponsorship of the teenager who, at just 15 years of age, is already competing at elite level after her top performances in this year’s race series.

OCR is one of the UK’s fastest growing mass participation sports and Evie is an absolute power house. We’ve been really impressed by her commitment to training hard and giving 110 per cent in the sport’s biggest events which attract experienced international competition. As she carries the momentum generated by her excellent results into training over the winter, 2020 looks set to be a really exciting year.

Evie is is continuing to make her mark at World and European level as well as in the UK’s major events. This summer she was top of the leader board in the Spartan UK & Ireland Race Series, both for her age group and for all females in the UK. Last month, at the OCR World Championships in Essex, the exceptionally cold and wet conditions took their toll and many competitors didn’t finish. Competing in her age group over the same 15km course and 78 gruelling obstacles as the adults, Evie completed the course, despite suffering from hypothermia.

The sponsorship from Howards has meant that Evie can train with top UK coaches and has made a real difference to her training and results in major competitions this year.

Thanks to her performances in this year’s Spartan UK & Ireland Race Series, Evie has already qualified to compete in the elite category in 2020. She will focus her efforts on qualification for the Spartan European Championships in Austria and the Spartan World Championships later in the year, which should allow her time to study for her GSCE exams.